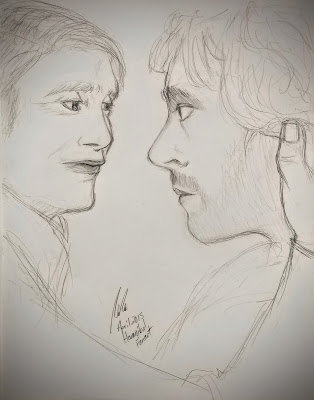 Oh my goodness, I love this show so much. But I butchered this fan art so hard hahahaha... ha. Better luck next time I guess. So many good scenes and expressions to pull from in this show. I'm watching the second season for the second time and it's just as glorious as the first. Actually, I think I like the repeat viewings better because I can't really pay attention to everyone's faces more. All the emotions, real or projected or whatever. It's a smorgasbord.

If you haven't seen this show, I highly recommend it. But before sitting down with that bowl of popcorn and binging the first season, please oh please be prepared. There is gore, there is horror (both physical and psychological), there is cannabalism, there is darkness. But for me, the most awesome part of this show is the real empathy that I felt between Will and Hannibal, our hero/villians. I have a hard time with my empathy, as I'm sure other folks in the world do, because I tend to feel too much under very specific circumstances. Blood, guts, gore, all that is fascinating, not as horrifying for me. But real, perceivable, connections and bonds between people (or people and animals, etc), that stuff kicks my empathy into overdrive. I've watched certain movies where I almost couldn't handle it, the feeling was so overwhelming. This show, for me, has given me a chance to have great insight in my own emotions and some wonderful conversations with friends on the nature of empathy.

I also really like connections that are beyond sexualization. Not that sex isn't or shouldn't be involved but I just like it when it doesn't even factor in. When race, gender, sex, background, all of that is fluff and all that remains is the connection we're watching occur in front of us, on screen or otherwise. For example, this 'seduction' of Hannibal by Will, for me it's nothing to do with a sexual attraction and everything to do with empathy. Will has used his ability to truly empathize with another person to his advantage and Hannibal appreciates this empathy, the fact that someone else could truly understand him has probably never happened before, right? And though Will does this seduction with the intention of trapping Hannibal, he also appears to be, himself, seduced by Hannibal in turn. I'm sure others have discussed this better than me but I wanted to put this idea out there anyway. It means a lot to me. People do good, people do evil. As no person is 100% good, no person is 100% evil. I just think that a little more empathy in the world would go a long way.

P.S.
I want to clarify that I don't condone any of the fictitious actions that Hannibal or any other pyscho or sociopathic person makes.
By meredithstudio at 7/08/2015 09:00:00 AM

Have an idea? Maybe you need a logo, branding, brochure layout, book illustration, character design, watercolor portrait, marshmallow mannequin?! Maybe not that last one. But for the rest of it -
Quote Request Form